Impact in Meetings: The Challenge for Women 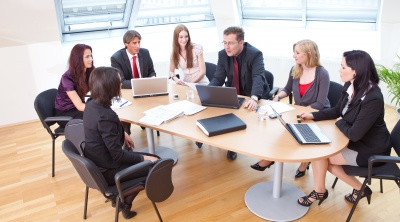 "In meetings, you sometimes say things that don't need to be said."

The day I received that feedback was a big turning point for me. I made a decision to be more aware of my motives for speaking: Was it mainly about justification (of my presence in the meeting, or even the team), or was it mainly about contribution (to the greater good of all concerned)? Every time I could see it was primarily about justification, I chose to remain silent until I could find a better way to make a real contribution.

This practice is good for all of us but it seems women have some additional challenges.

It highlights the challenges that female executives have often have in influencing effectively in meetings while also building a positive personal brand. It seems that there tend to be differences in the approach taken by men and women in meetings. Not only that, but women can suffer a prejudice based on pre-conceived ideas about the characteristics of their gender. For example, if they express a point of view passionately or getting angry, they can be seen as too emotional whereas men doing the same thing won't be seen that way.

Having coached many female executives I am well aware of the challenges they face. The masculine side of the human psyche has been dominant for a long time in western society and is found in most organisations. Feminine principles are equally important but are commonly resisted. It is not exclusively the domain of women to bring these forward, but women more commonly represent these principles. At the moment it isn't usually that easy to bring them forward but it is very important.

The bottom line is that women are often going to be prejudged as, for example, "too emotional" when they show a heartfelt expression or passion about something. To gradually chip away at these common prejudices, they have to be super-aware and work hard to find the right balance. Refining their awareness and skills will benefit them personally anyway. The Flynn Heath Holt article provides valuable tips for doing that.

It's a bit like being on parole: you are given less slack than others. Frustrating I know, but we have to work with the current reality. My appeal to women is to stick at it as each of you can make a small contribution to the big changes that we badly need to see.

The article says that men will have an confrontational debate then walk away from it and forget about it. I know that can happen, but I also know from the confidential conversations I've had with hundreds of male executives, that many do worry about things, even though they may not show it for fear of being considered weak. I wrote about men's confidence on a previous occasion.

I completely agree that it is unhealthy to ruminate for too long about something, but it is worth remembering that people who never reflect upon conflict and never experience self-doubt probably lack the essential qualities of awareness, sensitivity and empathy.

I passionately believe men and women all have keep working at this stuff to maintain the right balance individually and collectively. Notice I say, "maintain". Balance is a dynamic state, not static. It is not something you only need find just once and then pay no further attention to it.